How to Make Peppermint Bark (and impress your neighbors) 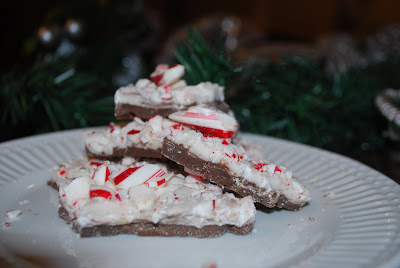 I found this recipe last year after I discovered the world of blogs and all the wonderful things they had to offer! I made a bunch to hand out to people at G's office as well as some friends and maybe some for myself too... :) 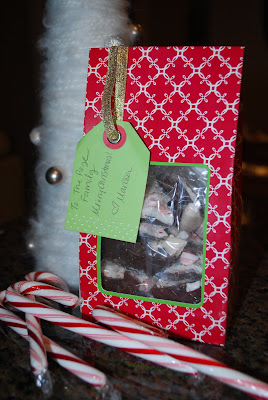 It's SO good. No really- its THAT good. In case you think I'm just bragging, here is one of about 10 comments I got after passing this out at work:


"So- I have to tell you...I went to a Christmas party and it was held by a professional baker. She made peppermint bark too, and yours is a million times better!"

G told me last year that after giving some to the ladies in management office they ate it all and came and asked if he had more! I don't blame them! I may/may not have had a new nibbles while making it this year.. well someone has to be the poison tester- right? I made 2 batches this year since I work with a lot of people at my office. However, this was still not enough for EVERYONE in my department since I sent a large bag over to G's family in the UK and sent a few more bags with him to his office. OH! And did I mention that G demanded several bags for himself? I've never seen him so crazy over a sweet treat before, but when I asked if he would share he was VERY reluctant. After digging around in the bag he produced the smallest possible piece and giggled as he walked away to munch on the entire bag in the corner by himself.

I got about 10 bags of bark per batch, but it depends how big your pan is and how full you fill your bags (I aimed for about 10 pieces per bag). did I mention how EASY this is? You can definitely do it! Did I also mention how I found these adorable treat boxes from Hobby Lobby for $3.50 (for 10)!!!??? I ended up going a second time- racing the clock to make it before they closed t he other night. I made it! What do you think? 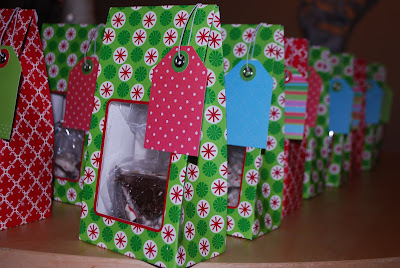 Peppermint bark was taking over my life! Oh, did I tell you that my mom called and wants me to make some as soon as I get to New Orleans so she can give it to her neighbors too? Sigh... 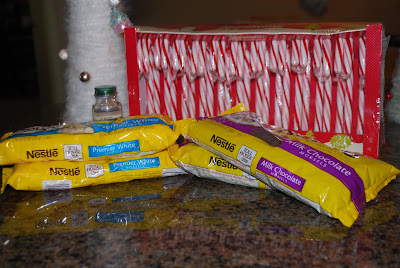 Preheat oven to 250. Line a baking sheet with foil and spray with cooking spray. Pour milk chocolate chips onto sheet and spread around evenly. 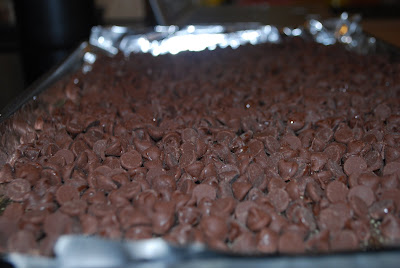 Place in oven for 5 minutes, or until they look a little melty. Using a spatula, spread the chocolate around evenly until smooth. Place in fridge for at least 30 minutes. 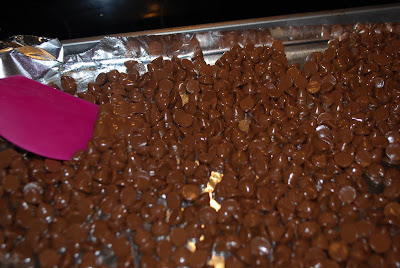 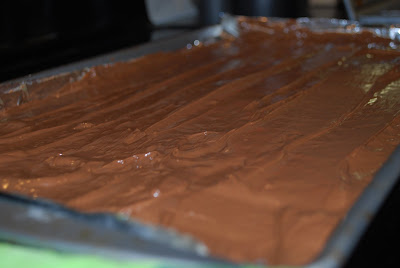 Now you can start unwrapping your candy canes. Break them into smaller pieces as you can, placing aside in a bowl. This is the worst part, I assure you. All those little plastic wrappers were clinging to my hands like crazy! 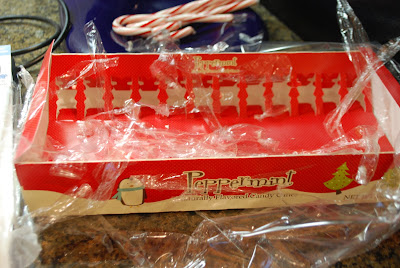 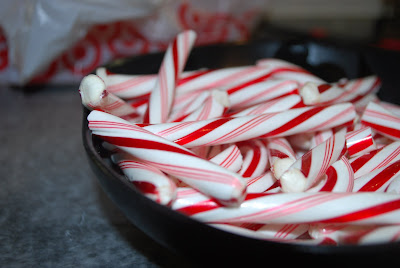 There's several ways you can crush them, but I found a less-mess way that works for me! I made a little envelope out of wax paper and packing tape. I poured the candy cane pieces into the "envelope" and closed it with another piece of tape. 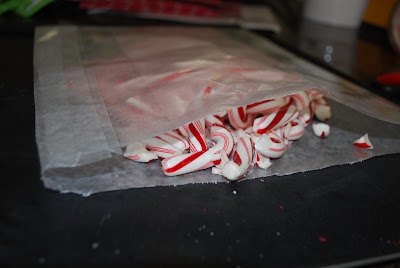 Place on top of a cookie sheet and place a dish towel on top of the "envelope." Using the smooth end of a meat-tenderizer or some sort of food hammer, crush the candy canes until they are in about 1/2 inch pieces. You don't want to crush them too much. 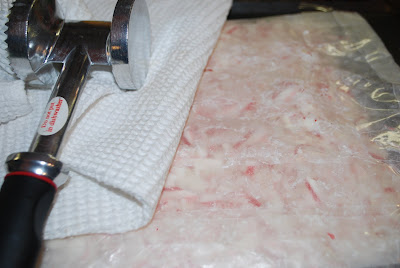 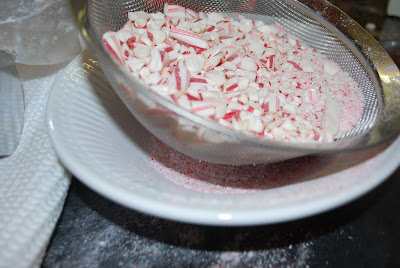 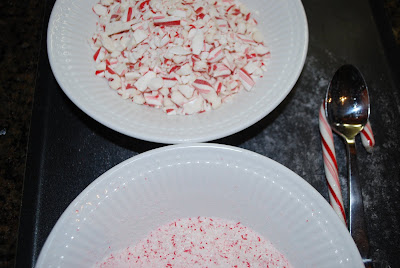 When your chocolate sheet is almost cool, its time to melt your white chocolate chips in a double boiler (I used a heatproof bowl over a pot of boiling water, making sure the water does not touch the bowl). Stir continuously until melted. 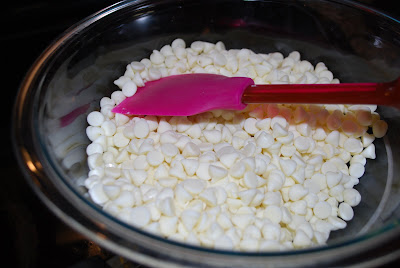 Stir in peppermint extract and candy cane dust (it will make it look slightly pink). 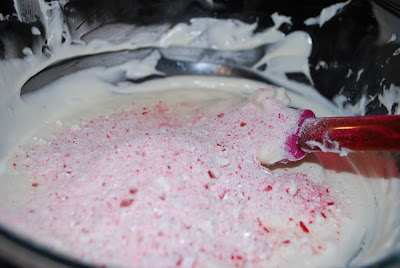 Remove from heat and let cool for a couple minutes before spreading on top of the milk chocolate sheet. Spread fast and evenly, so that it does not start to melt the layer below. 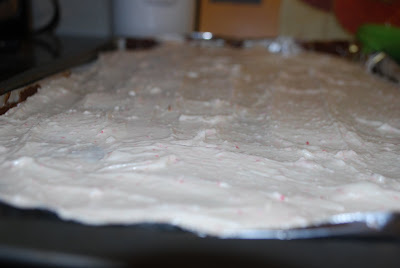 Sprinkle evenly with candy cane pieces, pressing down gently to make sure they stick. 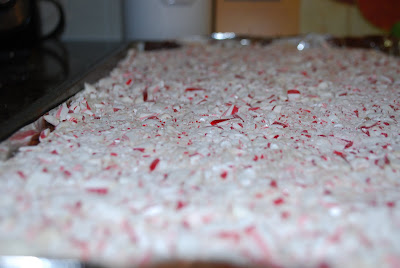 Refrigerate for several hours. Shake excess candy pieces off and break into pieces- I used a chocolate chipping fork like this one, which I THINK made less of a mess than years prior... 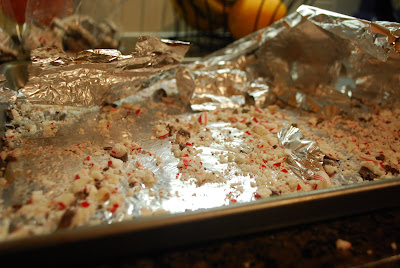 Separate into little plastic bags and gifting containers! Keep in the fridge until you pass them out. They taste better cold too! 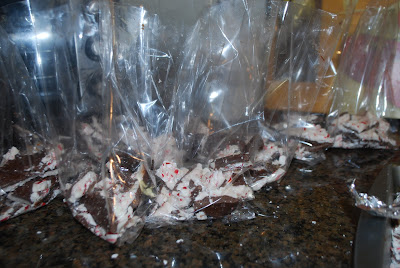 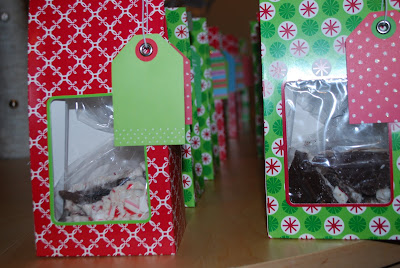 Be prepared to pass out the recipe right away! :)