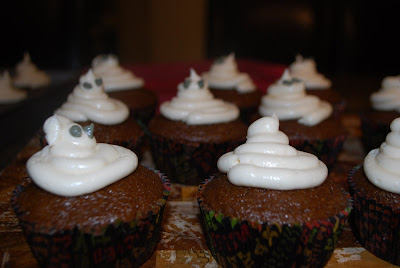 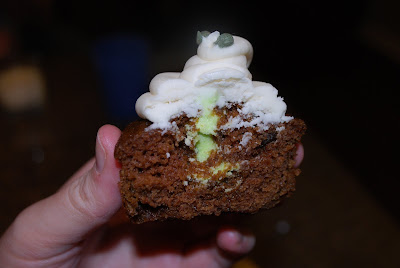 First I saw this. Then I saw this. And this. I knew I wanted to make something Halloween-inspired for my Halloween potluck at work (woo-hoo big party!), and thus Ghostbusters cupcakes were born.

Nothing too original here, but I do think that the slime idea was kinda cute. I got a couple different reactions on the slime (which is just green buttercream), ranging from "WHAT IS THIS GREEN STUFF?! What is in the middle of this cupcake?!" to "YUM! Slime!" The chocolate pumpkin cupcake recipe was found from The Dutch Baker's Daughter, which was adapted from Amanda. It was very tasty and moist, but was still a little too muffiny for me- although the icing added more than enough sweetness. Maybe this is because I bake a lot of pumpkin muffins, but not a lot of pumpkin cake... The bf kept saying "OMG! These are the best muffins ever! You could seriously sell these." EVERY time he ate one (which was a lot- as much as 4 in one day!), but I think next time I would definitely add more cocoa to make them more chocolatey. I also need to hone my ghost-making skills, but most people seemed to know what they were! :)

My friend Sandy came over with her dog, Sonny, for dinner (I made Fiesta Chicken Salad again) and she stayed to make cupcakes with me. Oh and here are my other "helpers." G was testing out his new office chair... 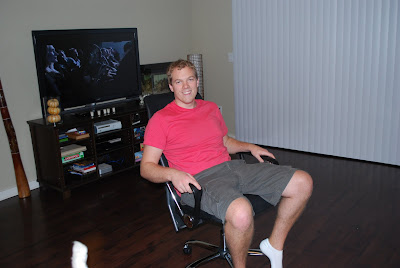 And then Sonny wanted to test it out too... 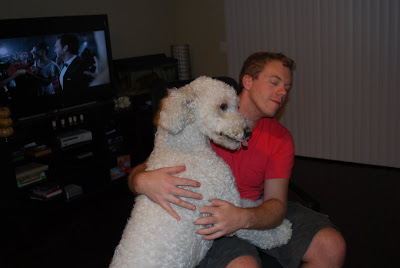 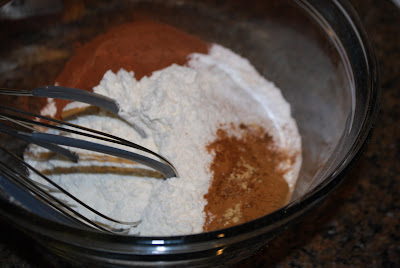 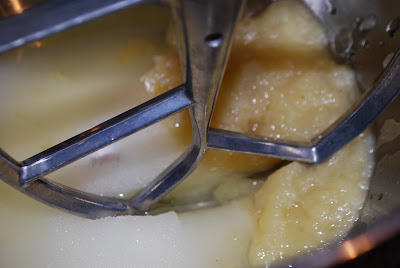 Add vanilla and pumpkin. Increase speed to medium and add eggs one at a time, beating well after each. 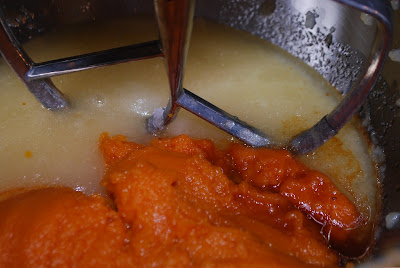 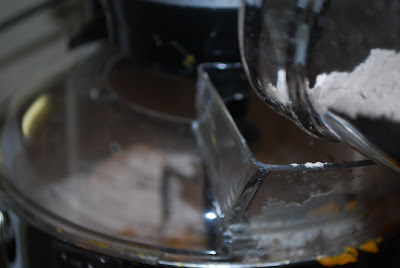 Turn off mixer and use spatula to scrape sides and bottom of bowl to combine everything well. 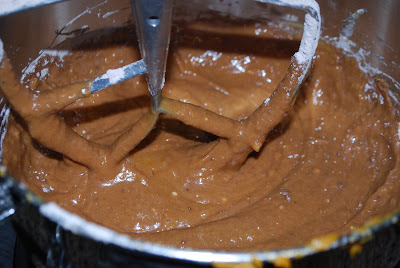 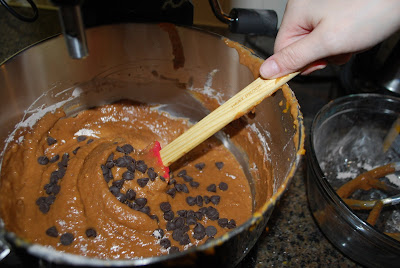 Scoop batter into muffin cups (I use a measuring scoop to make less of a mess). 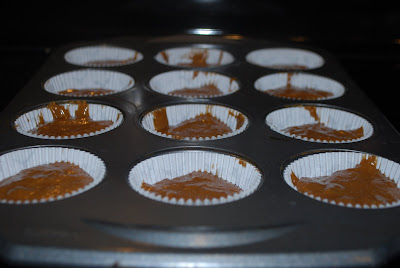 Bake 18-20 minutes, or until the tops spring back when lightly touched. Cool completely before icing.
Vanilla Buttercream (and Green Slime filling) 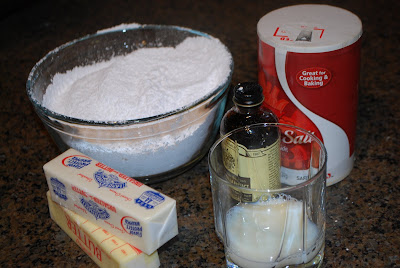 Using paddle attachment, cream butter for several minutes, until fluffy. Slowly add 3 cups powdered sugar (again, beware of the poof!) while on lowest speed. Increase speed to medium and add vanilla and 2 TBSP milk. Gradually add more sugar to stiffen and milk to soften until you have the perfect consistency. If you're going to pipe the icing, it will need to be a little thicker. 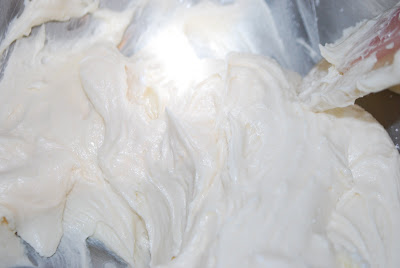 Separate about 1/4 of the icing into a small bowl and add food coloring until you get desired color (i.e. SLIME green), mixing thoroughly to incorporate color. 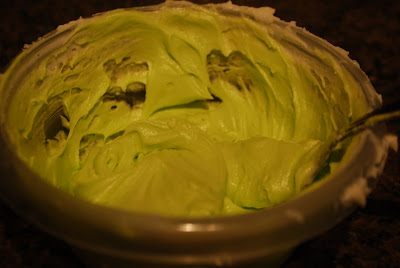 Place a long, filling tip into your icing bag and fill (no more than 3/4 full), twisting the end. If you don't have an icing bag, a Ziploc bag with the end snipped off works OK (although you really need this tip to be able to insert the filling). I am by no means working with professional tools- I got my bags and tips in a cheap cupcake decorating set from H-E-B (local grocery store)! 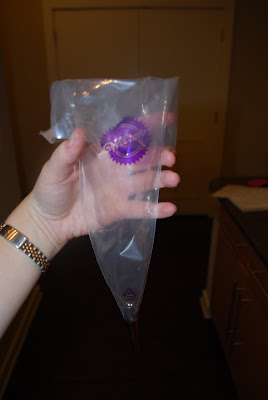 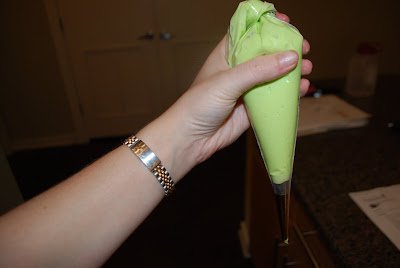 Next, color a spoonful of icing in a third bowl black or dark gray (this took a while for me to do with my food coloring- which is why I need gel icing for Christmas!) and place into an icing bag with only the smallest opening cut off at the end (no need for a tip unless you have a teeny tiny one).
Fill a third icing bag with the white icing to make your ghosts (I used the wider, rounded icing tip).
Once your cupcakes are cool, insert the long filler tip 1/2 inch into the top of the cupcake and squeeze for 2 seconds before pulling tip out carefully. Wa-la!- slime! 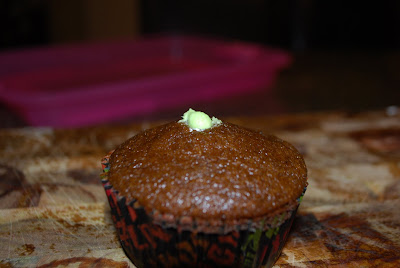 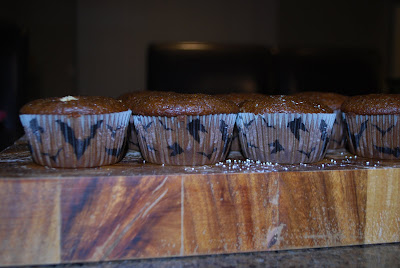 I couldn't really tell how much I was putting in there, but I knew I didn't want much, since I already had a lot of vanilla icing going on. If you want to put more you definitely could. It would also be really tasty with another flavor (chocolate? peanut butter?) inside with a different flavor (chocolate? vanilla?) cupcake. Oh the possibilities are endless!
Using the vanilla icing, slowly pipe into a circle on top, gradually piling on top like a snake and ending at the top with a little extra blob for Mr. Ghost's head. You can use the black icing to draw eyes or a face. Keep in fridge until you're ready to scare your guests! Boo! 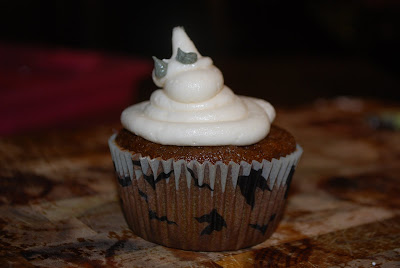 As you can see, I ran out of white icing (next time I would make 1 1/2 times this recipe) and made a few "gak" cupcakes with my leftover slime! 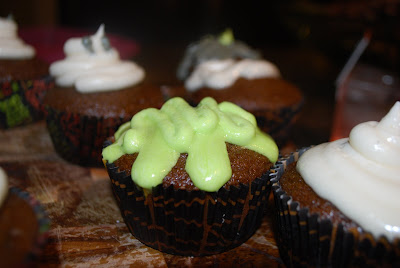 Hope everyone had a great Halloween with lots of treats! 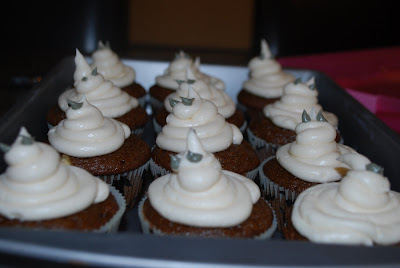 Posted by No Raisins on My Parade at 6:00 PM