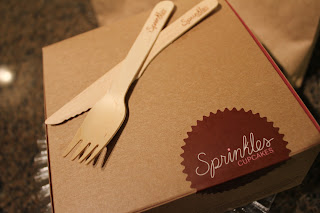 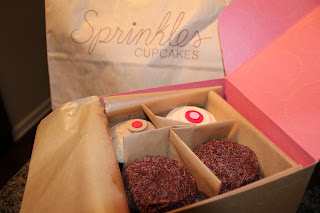 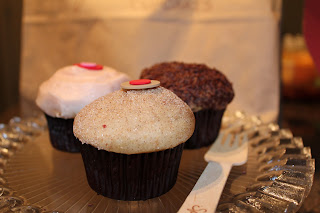 So I went to Houston last weekend to visit some of my favorite friends. It just so happened that I found out that Sprinkles had recently opened a new cupcake shop there. I NEEDED to go. It was calling to me! So we stopped by on a rainy Saturday afternoon, waited in line, drooled over these... 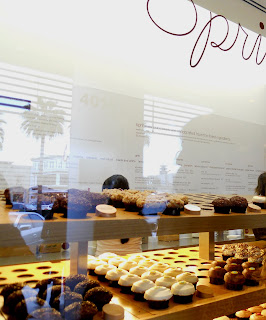 ...and enjoyed a few moments of silence while stuffing our faces on the bench outside. Perfection!! 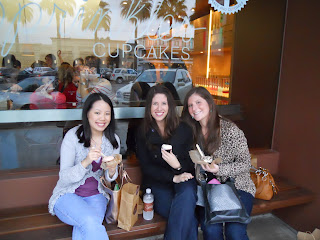 Then came a group of about 10 10 year-olds who, we overheard, were having a cupcake tasting day. GENIUS!! They were driving around to all the cupcake shops in Houston and doing a taste test at each one. I am shamelessly going to do this for my 24th birthday. You are NEVER too old for cupcakes! :) I'm not sure if there are as many cupcake shops in Austin, but it doesn't matter. Doesn't a day of blissfully eating cupcakes (and taking shots of milk in between) sound fabulous? Great. You're invited! :)

Anyway, I knew I must also take some to-go. 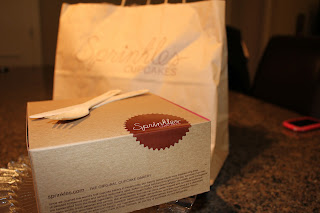 To be honest, I didn't tell the bf (who was back in Austin) that I got any to-go. I told myself this was because it would be a nice surprise, but secretly, I think I was trying to figure out how I could keep them all for myself! 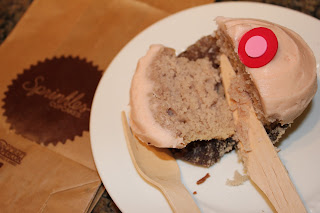 Seriously. The BEST. Cupcakes ever. Sigh,...Except for the Chocolate/PB (chalky taste) and Cinnamon Sugar (no frosting?!).... The strawberry was my favorite! 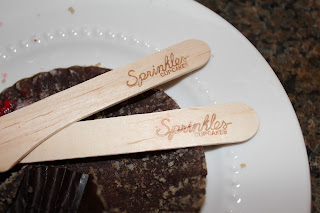 Sprinkles- when are you going to move to Austin? Posted by No Raisins on My Parade at 8:00 AM

Email ThisBlogThis!Share to TwitterShare to FacebookShare to Pinterest
Labels: cupcakes


Search for anything (except raisins)