I have made many things since I first thought of creating this blog, however this ice cream is the first thing I've actually taken a picture of recently, and today is the day I finally pulled it all together and made my blog come to life! :)

I bought a Cuisinart ice cream maker a while back for $20 at Marshalls (one of my favorite stores) - something I simply could not pass up! Honestly, I was not confident when I placed it in my cart that I would use it too often. However, I have to say I'm glad I proved myself wrong! I use it to make fro yo/ice cream/gelato/margaritas once or twice a month. Definitely a good investment! I love this brand, and my boyfriend's only complaint is that it is a little noisy.... but after he shuts his office door he is happy to come out again once the treats are ready!

Let my just preface this recipe by saying that I am not an expert on making ice cream at all. I have only made a couple flavors. My previous fav was vanilla bean- I will post that recipe sometime as well. I was looking for a recipe to change it up a bit but still wanted to use a vanilla bean (since I just got a bunch in bulk from eBay) and came across this caramel version. OK... so I googled "Caramel Ice Cream Recipes." I should save you the trouble and say this recipe isn't great, but some people who do not like super sweet things may like it better.. Anyway on to the recipe. 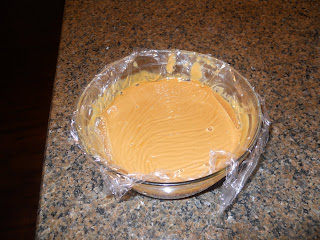 To be honest, this was not as good/sweet as traditional caramel ice cream and mine had a little bit of a burnt caramel taste (almost bitter), to which other reviewers of this recipe called "sophisticated." hmm To combat this, I served with fresh whipped cream and homemade chocolate syrup that I had leftover from this chocolate Sybil cake I made last week. It's not like I didn't eat it, but I think I might look for another ice cream recipe next time. 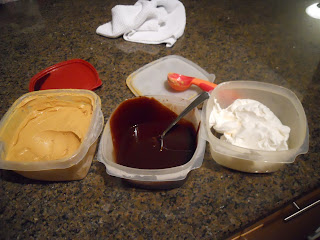 Boyfriend's comments (I should warn you that he is a harsh critic):
"Is this COFFEE flavored? I DON'T like this. ..... If I got this at a restaurant I would send it back. " After thinking for a few moments he said, "Well maybe other people would like it..." HA I knew this would not be sweet enough for him. I also made him try it before it had completely frozen because I couldn't wait to post my first blog entry, so that could also have had an effect.... haha 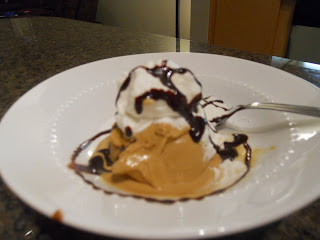 This was a bit of a disappointing treat to top off a great day spent with bf's brother and sister in law, who were in town for the weekend. There was no shortage of food as we started off the day with a delicious brunch on South Congress, went for a dip in chilly Barton Springs and enjoyed a margarita (or two) overlooking Lake Austin. Hoping they are able to come back soon so we have an excuse to try out the duck tour! :) 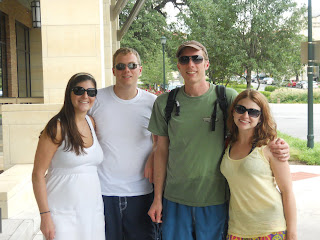 Have a great weekend!


Search for anything (except raisins)